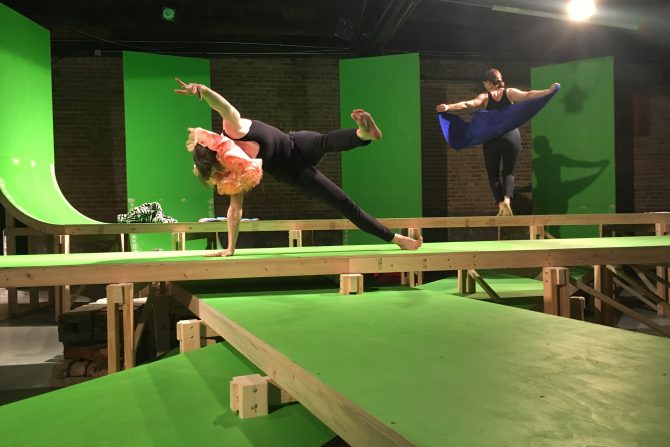 “Sometimes there’s this idea that interdisciplinarity is this commune of peace and love, a kind of hippie ideal that’s being promulgated,” said David Sundry, a design/build architect with three decades of experience in residential, commercial and mixed-use spaces. Dance audiences might better recognize him as a frequent collaborator with Zephyr.

Zephyr artistic director and choreographer Michelle Kranicke, also Sundry’s wife, has long created multidisciplinary works, but it wasn’t until the couple opened SITE/less in 2018 that they really solidified a joint commitment to putting dance and architecture side by side.

It’s more difficult than it sounds; the typical arrangement in dance and performance art often positions the choreographer as the lead, with other disciplines functioning like “sub-contractors,” as Sundry put it. In opening SITE/less, Kranicke relinquishes some of that control to allow other artforms to dictate her choreographic choices.

“They have their own terms and histories,” said Sundry of dance, architecture, cinematography and fashion design, all of which are incorporated in “On Notice,” premiering Thursday at SITE/less. “That doesn’t mean they don’t work [together] and they’re not going to continue to erode and shift the boundaries of each other, but don’t always expect a happy landing. On some level, you have to extend freedom and trust.”

For “On Notice,” Kranicke built movement patterns based on a series of platforms designed by Sundry. Each runway extends into a half pipe on the edges of SITE/less’s oblong space, and is painted an iridescent green color. This creates a green screen for camera man Ted Hardin and new media artist Mat Rappaport to follow the performers, Kranicke and Molly Fe Strom, paparazzi style, and insert backgrounds of Rappaport’s choosing using his Range Mobile media lab. Audience members can view the live or CGI versions in real time—Rappaport’s truck will be parked inside SITE/less—or later, as the mobile lab circulates the city showing Hardin’s footage.

Meanwhile, fashion designer Kristin Mariani will be constructing garments live, in response to Kranicke and Strom’s dancing. Bits and pieces like a sleeve or stole could be draped on them during shows, and audience members can also shop while they watch. “It’s this idea of using their movements as prompts for creating different intersections—in a garment, in a transaction,” said Mariani during my rehearsal visit to SITE/less. “So, things might look anti-fashion as a result.”

The idea of fast fashion—haute couture which progresses at lightning speed from runway to retail, and then to the giveaway pile—is omnipresent in “On Notice.” Mariani’s cranked out new clothes will make a trip down Sundry’s runways, the dancers’ poses projected into onto a digital platform and, rather quickly, discarded. But for Kranicke, who’s never lacking a juxtaposition, one of the threads of “On Notice” is what happens to those garments once they become passe.

“For me, I have a love-hate relationship with fashion,” said Kranicke. “I adore it. I also adore relics of past fashion that brings up these emotional parts of myself growing up.”

In addition to Mariani’s garments, a selection of 1950s hats that belonged to Kranicke’s mother are rotated on and off Kranicke and Strom’s heads. “She wore [them] without irony,” said Kranicke. “That is my love with fashion. But the kind of green screen, internet, selfie culture goes very much against my feminist side.”

Inspired, in part, by conceptual photographers Cindy Sherman and Laurie Simmons, “On Notice” plays with nostalgia as prominently as it tugs on fast-moving, impermanent trends and tastemakers. “The same top-down, mainstream advertising techniques that were coming from corporate America, that the first feminists were railing against, people are taking on and using today. From my perspective, there’s a misguided perception that because you take something on that somehow all those historical ramifications dissolve away.”

To the extent that those ramifications can be hewed by tangible items from Kranicke’s mother, and a duet with her childhood doll, named Kissy, the green screen digital world created for these dancers is softened by the vulnerability of Kranicke’s own life on the runway.