Finding the Edges: Architecture Leads the Dance in “On Notice” at SITE/less

In an oblong, dogleg room, an improvised space negotiated between a perfunctory triangular building and a Metra line, wife-husband creative team Michelle Kranicke and David Sundry are marrying the yielding, fluid yin of dance to the staunch and weighty yang of architecture. Not meld, mind you, marry—with all the compromise, conflict and elation the word connotes. “All disciplines have their edges, sometimes they’re porous, sometimes you can find ways in and sometimes they butt up against each other. When Dave comes to rehearsal, all his conversation about what he’s going to do is imaginative,” Kranicke says of the collaborative process. “Whereas [the dancers and I] physically show him, and there has to be a visceral, kinetic conversation. And it shocks me every time: if he says he’s going to build something with 130 cinderblocks, in my brain I know it, but when they’re actually there it’s like, oh my gosh! They’re heavy and dusty and if I bang my toe on them it hurts. The physical reality is interesting. We’re both trying to organize bodies in space.”

Since 2017 that space has been SITE/less, Kranicke and Sundry’s strangely magical, mercurial rehearsal and performance space-slash-gallery. Located on a dead-end (except to pedestrians) stretch of Augusta between Elston and the Kennedy, SITE/less is at once unexpected and banal. From the outside: a one-story brick structure, painted industrial gray, occupying all available space on the triangle formed by Augusta, a small service drive running north from Milwaukee Avenue, and the Union Pacific North and Northwest lines, right before they sidle up alongside the expressway. Inside, it appears the SITE/less portion of the structure was an add-on, enclosed by extending the walls of a once-separate building right up to the Metra line, resulting in one long, uninterrupted stretch of interior brick and concrete wall, riddled with cracks and patched over decades with old paint in a fruitless attempt to seal leaks. Overhead, gorgeous bowstring truss soars, supporting an arched roof with a skylight and industrial fans. I met Kranicke and Sundry there to talk about their upcoming collaboration, “On Notice,” running October 10-19 and part of the Chicago Architecture Biennial.

“On Notice” is built upon ideas from Sundry that tie together statements about representation imposed by mass media, ideas first put forth in the 1980s New York art scene—in which Sundry had firsthand experience—and how those techniques have become self-imposed in our self-branded, Instagram age. As we chatted, Sundry strode across the room, describing the layout of long, raised catwalk-like platforms, each backed by green screens, that will crisscross and stack at various levels throughout the space. Sundry likens the fashion runway to a pier, to a bland, anonymous structure that serves as a launchpad for next year’s hottest trends. “I’m trying to take what I call cynical infrastructures, where they take all this time and money and effort to figure out, but you’re not supposed to look at them—they’re almost like throwaway construction, like an eighties idea of commodities,” Sundry says. “To take these things and stack them up in an absurd way until they become interesting in and of themselves. Like those crazy spaces skateboarders colonize under freeways, where they become these romantic and desirable aspects of the city. The idea was to make these digital infrastructures of commerce, where you’re supposed to look away, and make them a place that’s desirable.” 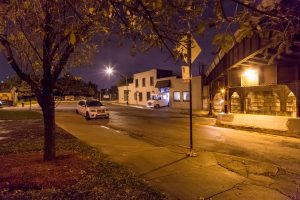 Dancers and audience members passing in front of the green screens will be captured by filmmaker Ted Hardin, who will serve as performer and cameraman, live-feeding to Mat Rappaport’s Range Mobile Lab, a 1995 GMC step van loaded with video gear in which Rappaport will use to live-VJ backgrounds and project them on the van and potentially throughout the room. Lots of concepts are at play: multiple personae, fashion, virtual reality, disposable construction. As Sundry and Kranicke enthusiastically talk through the project, each idea cuing three more from the other, concepts pile up like Sundry’s stack of intersecting runways. Another central thesis of “On Notice” is “space as server” and a line from Rem Koolhaas, stating that architecture disappeared in the twentieth century. To Sundry, the twenty-first century has heralded further denigration of architecture with the advent of massive, expensive buildings that exist solely to house servers—places that are exclusively launchpads (see runways) to someplace else. “Some people see this as radical or transformative,” Sundry says. “I tend to take the opposite view and see it as the final nail in the coffin, and us not realizing in this age of limited resources, that we’re still spending massive amounts of money constructing this infrastructure, which I call degenerate because the payback is unequal. If you’re not going to spend this money to create space, or here and now, and it’s just a launchpad to somewhere else it really renders [architecture] a second-class citizen.”

Within this dense web of architectural and cultural concepts, Kranicke weaves choreography to be performed by herself and dancer Molly Fe Strom, and to take place on the network of runways. It’s a departure from the duo’s usual modus operandi, which begins with ideas generated by Kranicke and her company Zephyr Dance, with Sundry fashioning architectural responses—a role reversal Kranicke found challenging, being accustomed to taking the lead. Sundry jumps in to say that he feels their work has always been in dialogue. Kranicke agrees… but still. “I was struggling so much at the beginning of this project because I didn’t know a lot about architecture or the eighties art scene in New York,” she says. “A lot of my personas come from a personal place, from practice in the studios. This was more an outside-in than an inside-out. It was a process of pushing on walls to find the brick that would move.”

That tension between creative disciplines is where the title of the show comes from, “On Notice” evoking a sense of being monitored, a warning and, for Kranicke, a Tarantinoesque Mexican standoff. And this is the very ethos of SITE/less, where the medium is, in part, the message: in a world where multidisciplinary art is quickly becoming the default, to rediscover the edges of art forms and find where collaboration is necessary, not automatic. It’s a potentially uncomfortable and complicated process—an unresolved project in an unresolved space. Kranicke says open-endedness is what she loves about her chosen discipline. “One of the reasons I became a dancer is because of the density, because of the possibility. That’s what makes it so gratifying to be a part of or to watch, because it’s not resolved, it’s not told to you.”

Sundry adds, in the concrete imagery of an architect, “The goal of critical thinking is not to wrap up and have a nice bow on a system of thought. And that’s not the goal of SITE/less to lecture on what art is. It’s to put at the forefront the skill set to look hard and observe so the next landing platform is solid. It’s like rock climbing: all that matters is the next hold.”