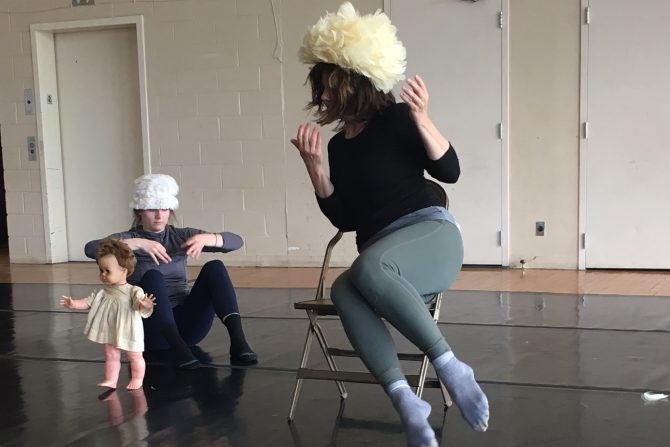 With On Notice, SITE/less and Zephyr build on the connections between dance and architecture

Choreographer Michelle Kranicke and architect David Sundry’s latest collaboration has echoes of 1980s postmodernism for the age of social media.

Michelle Kranicke, director of Zephyr Dance, and architect David Sundry have been creative collaborators for years in addition to being married. But their partnership took a significant step forward last year with the establishment of their West Town space Site/less. As part of the 2019 Chicago Architecture Biennial, they’re premiering their latest, On Notice, at Site/less in October.

Dance and architecture are both, as Kranicke notes, “charged with organizing bodies and space.” While past collaborations have been more about Sundry creating spaces in response to Kranicke’s choreography, she says that with this newest work, “the tables are flipped a little bit and I am actually reacting much more to the architecture rather than him reacting to the choreography.”

The piece, created in collaboration with dancer-choreographer Molly Fe Strom, both throws back to the past—Kranicke cites groundbreaking postmodern feminist photographers Cindy Sherman and Laurie Simmons as inspirations—and considers our present age of self-branding and social media.

In particular, Kranicke wants to explore how “because of selfies, because of the Internet, because of the phone being able to allow you to create a brand, these top-down mechanisms that were established by large corporate media to control an idea—specifically of what a woman looks like or what they should be—the younger generation is actively using those mechanisms.” On Notice questions whether it’s possible to take control of the mechanisms without falling prey to replicating “the same negative images,” says Kranicke.

Sundry’s environment takes center stage with green-screen runways upon which “fabricated personas” are projected. “My pushback as an architect is that, at some level, green screens are making architecture recede,” maintains Sundry, adding, “All the infrastructure of the Internet is huge and massive and expensive, but we’re not supposed to notice or look at it.”

The dialogue between past and present is also physically manifested by the Site/less space itself. Prior to opening Site/less, Zephyr performed at the Defibrillator Gallery. “It was always a little bit disheartening or bittersweet to see the architectural installations that we constructed at Defibrillator come down two weeks later,” says Kranicke.

By contrast, at Site/less, echoes of previous shows remain. Says Sundry, “The set from before can never entirely leave. For instance, if you do come here, the 1,500 bricks [from the environment for 2018’s Shadows Across Our Eyes] will always be here. They’re already on their fourth reconfiguration. It’s kinda like when you excavate, you find remnants of Troy or Carthage.”

Running parallel with On Notice is Critical Groupings, an installation created by Sundry out of concrete parking stops and based on the “feasible utopias” of Hungarian-born French architect and urban planner Yona Friedman, which will then be used by five different artists to initiate “performative explorations” into concepts of trust and openness. The initial five will then nominate other artists, who will remain unknown to Kranicke and Sundry, to use the space.

“We look at it as an exercise in institutional openness,” says Kranicke. “Part of the mission of Site/less is to push against traditional models of curation. Large and small organizations all work within a specific curatorial parameter, and we wanted to look at those parameters and propose different ideas and push back against the traditional way.”