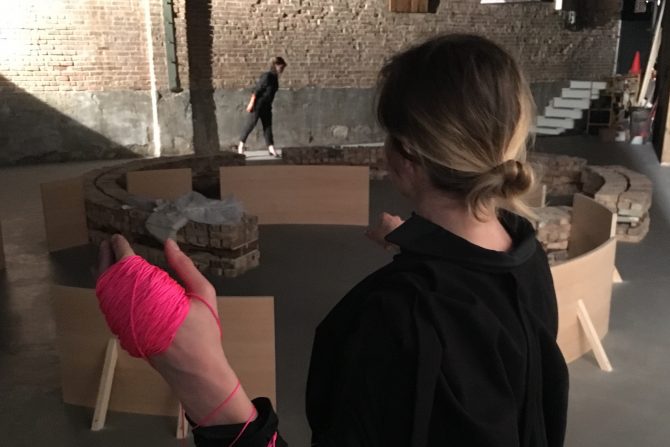 The experimental dance company performs on stage … and on windows, on stairs, and anywhere it can.

In Zephyr Dance’s Shadows Across Our Eyes, which opens April 26, artistic director Michelle Kranicke and dancer Molly Strom stand far apart from each other, holding a long strand of bright pink and orange mason’s line. “We’ll start by wrapping it around our hands,” Kranicke says. “As we’re trying to keep it taut, it gets more and more wrapped.” The scene looks like a Wild West duel, but instead of a dusty street with a saloon in the background, the setting is a raw industrial space. “It sets us up as masculine figures,” Kranicke explains, “but we’re wearing heels and binding our hands in a way that is similar to foot binding Chinese women used to do.”

For the last six years, Kranicke has been collaborating in earnest with her husband, David Sundry, an architect with almost 30 years of experience building homes and mixed-use spaces. Zephyr’s aim is to put architecture and dance on equal footing, something that’s largely carried out by Sundry’s creative use of space. For 2016’s Valise 13, he constructed elaborate, colorful installations throughout Defibrillator Gallery in West Town and incorporated the venue’s front window, staircase, basement, and garage in his stage design. At one point in the performance, Kranicke even had to crawl over audience members sitting on the steps.

Shadows Across Our Eyes builds off elements of past Zephyr shows (2014’s The Balance in Between likewise featured mason’s line as a prop), but the piece marks a significant milestone. Zephyr will now host its works at a dedicated space, SITE/less (1250 W. Augusta St.), a new West Town arts venue it’s renting. This will give the company more time to conceptualize, build scenery, choreograph dances, practice, host longer runs, and collaborate. Says Kranicke: “I want to create a space where other artists and dancers will have a chance to put their work out there.”