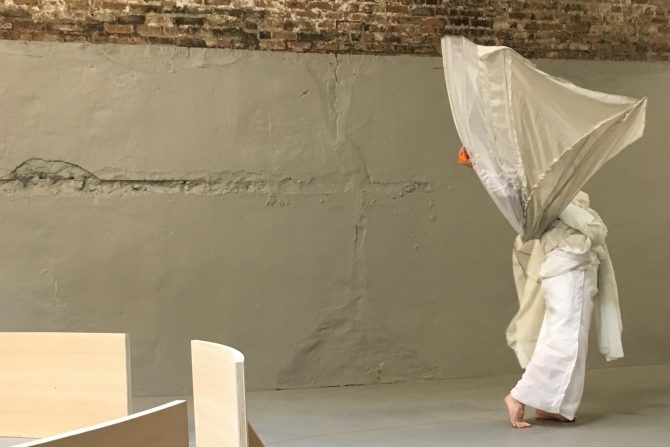 Michelle Kranicke and company thread their way through Shadows Across Our Eyes.

Site/less designed by David Sundry, sits at the T where Willard meets Augusta, an empty lot traced with barbed wire to the south, el tracks to the west. Beyond its doors lies a curving corridor with unfinished stripes of cement licking the exposed brick walls. For Zephyr Dance’s Shadows Across Our Eyes, the first work presented in this new space for experimental performance, two short henges of brick and plywood are laid out on the floor, intersecting like a Venn diagram. The audience is encouraged to roam the space throughout the show, which begins when an iPad is affixed to the wall, forming its only window and showing an inflated white balloon, or maybe only a tied-off trash bag, bobbing against a short leash in the wind, a joyful, absurd thing in a desolate landscape.

Choreographer Michelle Kranicke emerges first, unspooling a red thread behind her like Ariadne in the labyrinth as she crosses through the space. On the other end of the line is Molly Strom. They look enough alike to be doppelgangers in different time zones, Kranicke dressed in black jumpsuit zagged through with colored thread, Strom in a poncho of the same cloth, both in black heels that tap imposingly against the concrete floor. Together they produce a series of images that emerge and then vanish: a cat’s cradle, twin marionettes pulling each other’s strings, Penelopes undoing a day’s work, semaphores sending signals, the life cycle of a winged insect, pupating to the brief mirage of the imago.