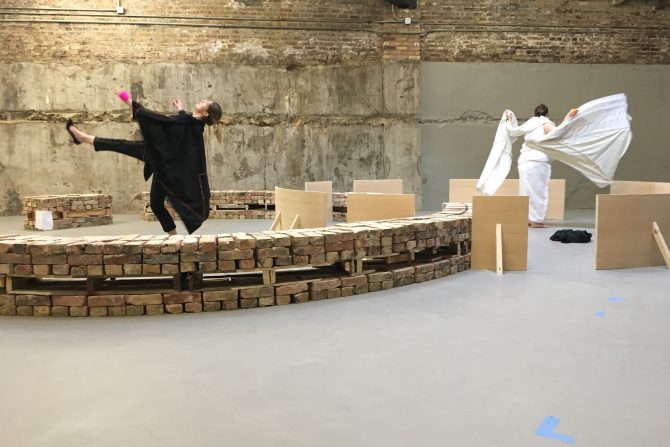 Bricks are loosely stacked to create arch-shaped benches, forming a circle with a few points of exit, and a place for patrons to sit for the premiere of “Shadows Across Our Eyes,” Zephyr Dance artistic director Michelle Kranicke’s newest work. This short, circular wall-turned-benches forms a Venn diagram, interlocking with knee-high wooden arches propped up on their narrow ends. Apart from some white breezy fabric laid on the end of one bench, these wooden arches are the only soft good to be found in SITE/less, Zephyr’s new performance venue tucked into a West Town industrial corridor between the Metra tracks and I-90/94.

Unless you look up. The spectacular wood beams on the ceiling play creatively with Rich Norwood’s arresting lighting design, which casts dramatic shadows across SITE/less’s walls and concrete floor.

The new space is an extension and deepening of the creative partnership between Kranicke and her husband, architect David Sundry, who have collaborated together for about six years creating immersive performance experiences combining movement-based performance and the built environment on a one-to-one ratio. And in the interest of permanence, Sundry has been busy painting the floors and walls, and building an ADA-accessible restroom in addition to building the artistic architectural elements of “Shadows Across Our Eyes.”

So, in comparison to previous works Kranicke and Sundry have created together like “Valise 13” and “Balance in Between,” “Shadows” feels sparse. But in a way, that only serves the piece, and the event’s other aim: a ribbon cutting for SITE/less.

An iPad showing images of stark landscapes, sunflowers, and close-ups of eyes is mounted on the space’s diagonal wall, which butts against the embankment for the Metra line; the clang of a train can be herd over a mostly-atmospheric score and the clack of high heels on the cement floor, worn by Kranicke and the evening’s only other performer, Molly Fe Strom.

At the opening, Kranicke walks through our circle, unravelling pink mason’s line on her way to the far end of the space, at which is a short set of stairs to the emergency exit. As if by kismet, the heater above Kranicke’s head shudders on, and she flips the off switch as a symphonic western movie score takes over and she postures, stepping her stiletto-clad feet further apart, filling out her black jump suit, which is accented with orange piping (costumes by Amanda Lee Franck). She winds the string around her hands, held taught by a not-yet-visible Strom, who eventually emerges at the opposite end of this duel.

They revolve their wrists like spinning slow motion pistols, winding and winding the two lines of string around their hands and nearly whacking several patrons. The two women cross through our pow-wow at the center, coming closer together until they stand, eye to eye, directly in front of the iPad.

“Shadows’” salient moments are many, not least of which comes near the end, when Kranicke unravels her black jumpsuit, wriggling into that white tube of fabric at the edge of one brick bench. The image is quite clear: a caterpillar transforming into a butterfly, first by entering the white sheath and then extending a stiff wing that projects from the end of this fabric cocoon.

Meanwhile, Strom struggles on in her black jumpsuit, which is overlaid by a stiff poncho, tangled up in the twine and putting her heels back on after the women had danced, unshod, for some time. Strom retreats backward, toward the staircase where the whole thing began. She sees us and makes eye contact with the audience for the very first time, and then leaves out the emergency exit.

Like, really leaves. Strom’s exit marks the end of the performance, but we sat for quite awhile before we were ready to clap. For me, “Shadows” makes a strong comment about women: its two performers embody iconic male postures, but their hands are bound. The veins in their feet show the struggle that is every female foot in an uncomfortable burden of femininity, but stilettos can also be viewed as a symbol of empowerment. They increase height, accentuate features of female bodies, announce an arrival into a room. At regular intervals, Kranicke and Strom embrace, and then rail against feminine archetypes, ultimately settling somewhere between transmutation and desertion, all the while exerting remarkable control of their movement as they get vulnerably close to us – par for the course over the last decade of Kranicke’s work – but not asking more of her audience than she should.

“Shadows Across Our Eyes” is compelling enough that I want to see it again. That surprised me.

Zephyr Dance presents “Shadows Across Our Eyes” through May 5, Thursday through Saturday, 7:30 p.m. at SITE/less, 1250 W. Augusta Blvd. Tickets are $15 and available at zephyrdance.com and on See Chicago Dance.

Lauren Warnecke is the dance writer and critic for the Chicago Tribune.