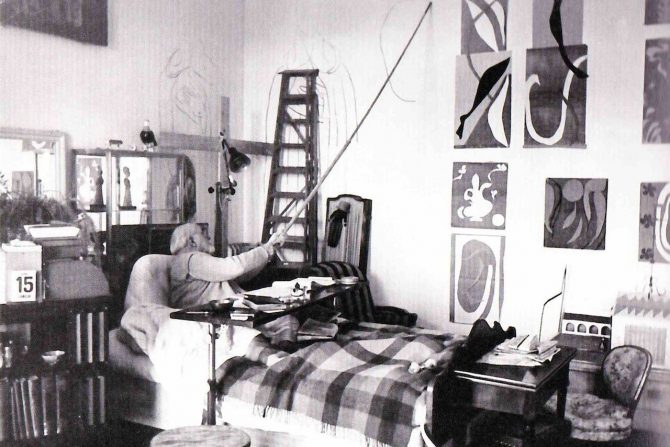 Limitation and a Forward Path

In the 1940s, Henri Matisse, infirm and often bedridden, began to explore cut papers as his sole means of expression. Radically experimenting with the “cut-outs” (this formal method, now considered autonomous works of art in and of themselves) allowed Matisse to continue his exploration of color, decorative strategy, and economy of means, and, to push himself to a whole other level.

So here is Matisse, confined to his bed. And he now comes to see that these cut-outs, which he first used as a simple visual tool to map out and plan large scale projects, as a means for him to continue his work despite his limited range of movement. Working from a chair or bed, he could cut out paper shapes and easily pin them to a board. Or he could draw, with charcoal attached to a long bamboo wand, and continue to work at a large scale despite his confinement. He turned his bedroom into a small replica of the Chapelle du Rosaire de Vence, a late commission to design the stained glass windows, and eventually the chapel itself, including the vestments for the priests. He executed all these designs using the cut-out technique.

“I have needed all that time to reach the stage where I can say what I want to say.” (Henri Matisse)

For most of the modern movement, radical progress of content accompanied radical experimentation with form. Since many historical disciplines and categories are fading from cultural memory and practice, and the interdisciplinary has become the established default term, maybe it is finally time to take up Yvonne Rainer on her suggestion and “admit the aged body into the historical rabble.” Real limitations define the aging body, and these limitations can open a pathway to rethink, not only our own artistic practices, but also the traditional definitions of dancemaking in general. The new limitations of the “how” will necessarily rethink or rework the “what” of the form.

A recent New York Times commentary focusing on dance artists who continue to perform past the age usually associated with dancers stated, “Growing old is not for the weak, but dancing old is grit incarnate.” My sense of that statement is that it specifically referred to the challenge that comes with continuing to dance—to move the body in ways that go beyond typical pedestrian and mundane movements. To push a physicality that is often reserved for a younger, stronger, more pliable physique. Though in some sense complimentary, the statement can also imply a sense of false admiration and relegates to the aging performative body a misplaced sense of heroism or sympathy—a place where people nod their heads in knowing understanding of the challenges that accompany limitation. But real renewal does not work this way. Dance does not need older dancers doing the same old things. Age needs to offer something vital to the form itself and there is no room for sentimentality when pushing for the advancement of content through experimentation. Late style, the aging body, that aged body’s relationship to younger dancers on stage, public understanding of dance, and how to formally challenge the art form—these ideas merit investigation, not simply recognition. Dance could use some formal rethinking, and the limitations of the aging body might be just the catalyst to push the art form in new directions. Again, in the words of Yvonne Rainer commenting on herself as an aged dancer, “Pity me not!”