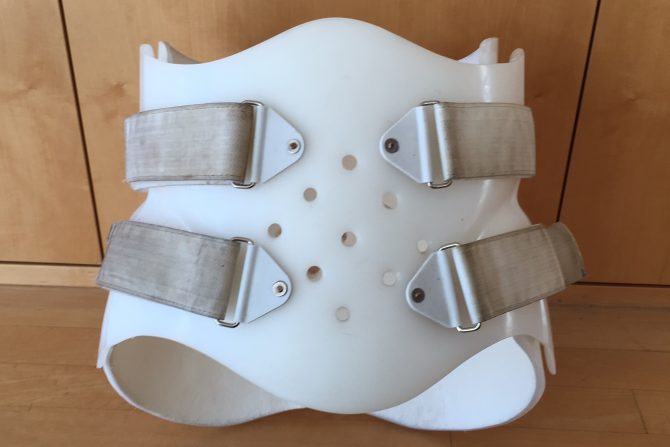 The Unnerving Path of Least Resistance

In May 2017, after more than a decade of managing chronic pain, coupled with the realization—and the diagnosis—that my skeletal geometry was becoming increasingly unstable, I scheduled an anterior lumbar spinal fusion. The surgery fused my L4 and L5 vertebrae and removed the disintegrated disks between the bones. During recovery I was required to wear a TLSO body jacket, or hard brace, for three months. I could not drive. I could not twist. I could not bend at the waist or hip. I could not lift anything heavier than a gallon of milk. If I dropped something, I sometimes thought twice about whether or not the dropped object was necessary for my existence. And throughout the summer I discovered a variety of new and innovative uses for my first and second grand pliés. But—I could stand and walk again without pain, something that had become a distant memory before the surgery. My entire prescription for physical therapy consisted of walking daily and increasing the distance day by day. I was thrilled with the results.

Four months later I was back in the studio. I could stand (“Wow!” I thought. “I have not been able to stand comfortably in my work for a number of years”). Yet, surprisingly, anxiety surrounded the change—now I could walk, stand, turn, and even jump a little, but something was missing.

For the past decade or so, I have worked to create a style of choreography that consciously pushes against more public understandings of dance. Pain, both its presence and its accommodation, had been a component in the development of my aesthetic. Sometimes my chronic injury inadvertently influenced my investigations. While I never shied away from the pain when making dance, I was always looking for creative formal solutions that worked as interesting movement and also circumnavigated my discomfort. My pain became one pathway to slowly move outside traditional boundaries of choreography.

This unexpected realization led to new questions and anxieties: What about the strength I had built up to overcome that pain? Would it diminish? And what about all the tools I had created to deal with the unpredictable onset of neuropathy in my feet? What of the extreme hyper-awareness of my own body, other dancers, and my relationship to the choreography? I had built up strength and flexibility around my injury to keep myself walking and to service my choreography and the aesthetic that was developing alongside my limitation. However, it was not until the recent removal of pain that I realized how important it had been to my process during the past several years. So there it was—whether I liked it or not—my pain was my partner. And, to that end, it had been instrumental in the formation of my new grammar. 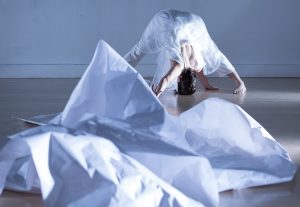 But the pain is not the point, it was merely a condition. But it was my condition. And in a process, if you are honest, there is always more at your disposal. One can use one’s ability to elaborate and mold experience until it is generalized enough that it moves in other unexpected directions and becomes something else.

Post-surgery there are recovered freedoms, but also new liabilities. Before, I had to psychologically gear up to go into the studio. Though the pain was familiar and part of my landscape, it was still draining, and it had an appetite that consumed huge amounts of my energy. Resting on my head became a way to seek relief. Before, I would investigate postures to avoid discomfort and, from those movements, form a work. I knew what to do. I knew where to go. I knew where not to go. I understood my body in relation to those dancing with me and how to work with it.

Now, the studio is different, challenging—harder in another way. Something is missing. How do I begin again? My intense path of resistance has been removed. The field is wide open. On some level, my pain—that roadblock, that limitation, that nemesis—was my friend. I had partnered with it, and now the partnership is dissolved. A major parameter is missing, and a new process will need to emerge to replace what was apparently a requirement.

So there is the studio, and my path to it is surprisingly pain-free, and the door is open, and I step inside…. and….