I have been actively collaborating with David Sundry, an architect and my husband, since 2012. Together we have created several works that put movement and architecture on equal footing. Dance and architecture are both involved with the organization of bodies in space, albeit the methods of that organization can be vastly different. This coming spring, Zephyr, David Sundry, and I will take on our biggest project to date with the launch of SITE/less.

SITE/less is a guerilla storefront located at 1250 W. Augusta Blvd., an edge site with ancillary relationships to a variety of urban crossroads and infrastructures. The building abuts the stonewall of the elevated Metra line and is further enclosed by the Kennedy Expressway, a service road, a crosswalk, an overpass, and two municipal maintenance and storage facilities. SITE/less anchors the edge of a small triangular residential enclave and is situated between the West Town and Noble Square communities.

Positioned as an experimental architecture, movement, and research center, SITE/less seeks to rethink the relationship between the typical model of most performance venues and how the organization of those venues inevitably limits and conditions the curatorial practice. One focus of SITE/less is to develop a space that is, in itself, performative and to make use of an architectural approach that serves to stage a program of expressed activities while, at the same time, employing a structure that is open to unplanned social interactions and chance events. 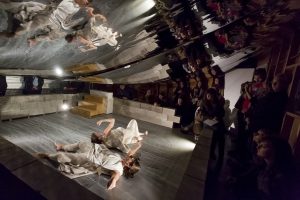 As artists involved with the critical debates and ongoing negotiation concerning the state of contemporary artistic practices, both the site and the center itself will begin by posing an array of questions. How does a “center at the edge” support the local? How does an institution located in a community both define, and at the same time restrict, that community and how does a community restrict an institution? How does SITE/less shift fixed ideas of dance in a gallery space? Within SITE/less, how is the body as performative object directed to explore interactions between performer, object, and viewer? What are the movement possibilities that arise through this persistent interface?

In considering a critique of the interdisciplinary model of the over-expanded field, SITE/less is not interested in the transgression or overthrow of existing cultural frameworks and disciplines. It is interested in looking at the expanded form as a series of provisional negotiations or debates, which also serve to highlight the micro-histories of these artistic disciplines and therefore possibly re-establish them in a new way. SITE/less will be an incubator, a laboratory, a physical structure, a dance, and a place where distinct art forms can speak directly to each other.

Finally, SITE/less aims to facilitate connection with the public and promote social interaction by creating a non-typical arena to host non-art events such as community meetings and pop-up dinners. In addition, the center will work to establish an open gathering zone not unlike a reading room, Internet hotspot location, long-term art installation, or other types of public space located within a private building. SITE/less will situate itself in the landscape of other venerable institutions in Chicago, provide another venue for experimental time-based work, and create opportunities for the center to engage with a broader community of artists and architects. We look forward to the official opening in April and the many new opportunities for interaction.